Introduction: One of the major pests of apple trees all-around of Iran is two-spotted spider mites (TSM, Tetranychus urticae Koch (1836)). This pest reported from Gorgan and Mazandaran areas for the first time. This cosmopolitan mite is reported in almost all parts of the country and found in all countries of the world on more than 150 economic plant species. This pest has been causing damage to the farmer in various apple orchards in the country every year. Because of high rate of fecundity, high population density, short life cycle and develop resistance to pesticides, TSM is an invasive pest on apple trees and difficult to control. Also, due to the continued use of various broad-spectrum chemical insecticides / Acaricides to controlling this pest, in addition to making the potential of resistance, it has also eliminated natural enemies. Up to date no botanical acaricides has been registered on TSM in apple orchards of Iran. Accordingly, Pestout® as a botanical acaricide to control the active stages of TSM at two concentrations and in comparison to spirodiclofen and fenazaquin were evaluated in three provinces of Tehran, Isfahan and Khorasan Razavi in 2018.
Materials and Methods: During 2018, Pestout® contain cottonseed and clove oils as a botanical acaricide to control the active stages of TSM at concentrations of 3 and 5 ml/l and in comparison of spirodiclofen SC 24% (Envidor®) 0.5 ml/l, fenazaquin SC 20% (Pride®) 0.5 ml/l and control (spraying) were evaluated in three provinces of Tehran, Isfahan and Khorasan Razavi in 2018. The experiment was carried out in a randomized complete block design with three replications (each replicate containing two trees variety yellow with the same conditions) for each treatment. Sampling was taken 1 day before and after spraying, at 3, 7 and 14 days’ intervals from 40 leaves of each experimental unit. Then the immature and female adults of spider mites in the leaves were counted and registered by using binocular in Agricultural Zoology Research Laboratory of the Iranian research institute of plant protection and also in Isfahan and Khorasan Razavi provinces. Data obtained from sampling were corrected by Henderson-Tilton formula. The normality of the data was evaluated using SAS software and Kolmogorov-Smirnov test. After analysis of variance using one-way ANOVA in SAS software mean comparison was performed by Duncan’s multiple range test in SAS 9.4 software.
Results and Discussion: The analysis of variance showed that there was a significant difference between all treatments with control in three provinces across all days. Based on the results obtained in Tehran province, both concentrations of Pestout (With more than 82% mortality) besides of Envidor (with more than 86% mortality) were most efficient in all days after spraying. In Isfahan province, the efficacy of Pestout in both concentrations were in the same group with Envidor and Pride. On the other hand, no significant differences were observed between the abovementioned treatments in all days. In fact, for all four treatments acceptable performance recorded. In this province, the mean mortality of 3 ml/l Pestout varied between 74% to 80% during the test days and for concentrations 5 ml/l were 77% to 82%. In Khorasan Razavi province, the efficacy of Pestout 5 ml/l on 3, 7 and 14 days after treatment were more than 92%, 94% and 89% mortality, respectively. Also, mean mortality at concentrations 3 ml/l were recorded 84.70%, 89.91% and 82.16%, respectively. Therefore, both concentrations in this province had a good efficacy.
Conclusion: Poor orchard management and the effects of climate change, are increasing pest problems, including TSM incidence, in Iranian orchards. Increased chemical pesticide use is leading to greater occurrence of pest resistance, insufficient control and increased production costs are some of the problems. The registration and implementation of low risk and effective botanical pesticides are one of the best methods for solving the problem and make a great IPM program in the orchards. Therefore, in the present study, it can be concluded that Pestout is a good candidate for controlling the two-spotted spider mite on apple trees, and the concentration 3 ml/l of this compound is recommendable in Iran. 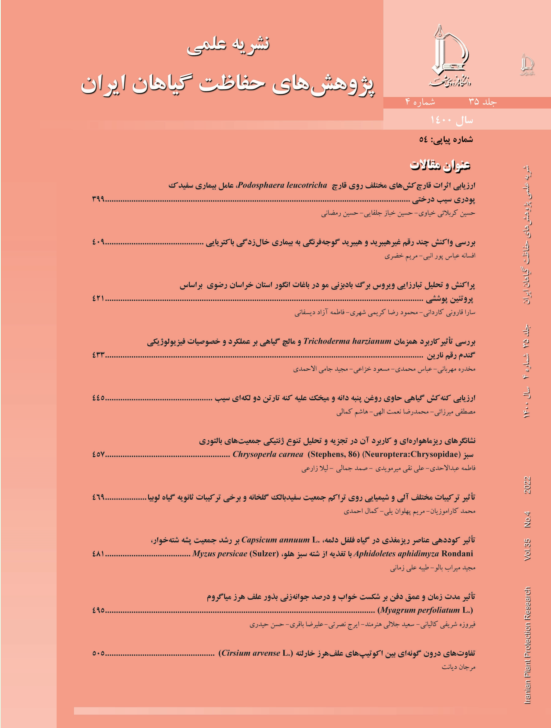