Introduction
Herbicide safeners are chemical compounds used in combination with herbicides to make them "safer" that is, to reduce the effect of the herbicide on crop plants, and to improve selectivity between crop plants versus weed species being targeted by the herbicide. Herbicide safeners can be used to pretreat crop seeds prior to planting, or they can be sprayed on plants as a mixture with the herbicide. Salicylic acid (SA) and other salicylates are known to affect various physiological and biochemical activities of plants and may play a key role in regulating their growth and productivity. This hormone is synthesized by many plants and is accumulated in the plant tissues as the impact of unfavorable abiotic factors, contributing to the increase of plants resistance to stress. The aim of this study was to evaluate the efficacy of salicylic acid as a safener in corn tolerance to non-selective herbicide; sethoxydim, and the response of two weed species of johnsongrass (Sorghum halepense (L.) Pers.) and junglerice (Echinochloa colona (L.) Link) to it.
Materials and methods
The effect of sethoxydim (0.5, 22.5, 45, 94, 187 and 375 grams of active ingredient per hectare), and salicylic acid (in concentrations of 0, 1 and 2 mM) as factorial experiment in a completely randomized design were investigated to evaluate the response of fresh weight of corn, johnsongrass and junglerice. Salicylic acid treatment was used in seed priming form also. Pre-treatment of salicylic acid was done three days before herbicide spraying. Spraying different doses of sethoxydim herbicide in a complete five-leaf stage, was done using a mobile rail sprayer (Matabi, Spain) equipped with a flat-fan nozzle (8002), a delivery of 220 L ha-1 and a spray pressure of 200 kPa. To investigate the changes in photosynthesis in the treated plants, chlorophyll fluorescence of the leaves was evaluated on the sixth day after application of herbicides by PEA model fluorometer. Three weeks after spraying the herbicide, the shoots of the plants were removed from the surface of the pot and their fresh weight was measured.  Analysis of variance was performed using generalized linear models (GLM) in SAS 9.2 software environment. Before performing analysis of variance to determine the normality of the data from Anderson-Darling test in Minitab ver. 17 were used, and in cases of non-normal data, Box-cox two-way power transformation was used in the same software. Analysis of variance, was performed as a factorial experiment for each plant to investigate the effect of the herbicide dose of sethoxydim and the concentration of salicylic acid and their interaction. The trend of wet weight changes of different species under the influence of different amounts of herbicide sethoxydim was investigated using the four parameters log-logistic equation.
Results and Discussion
Dose-response curves of fresh weight of the treated plants showed that weeds were significantly affected by sethoxydim compared to corn. In all species, by increasing the concentration of salicylic acid, the ED50 increased. For all three levels of salicylic acid treatment, this parameter was the greatest in salicylic acid treatment as seed priming than others, and the lowest values of this parameter were observed for jungle rice. The highest amount of ED50 was 210 gram of active ingredient per hectare for corn sown with 2 mM / L salicylic acid treatment, and the lowest value was 31.5 gram of active ingredient per hectare for non-salicylic acid treatment in jungle rice. Kutsky’s curves for corn and weeds showed that Fluorescence chlorophyll was increased with the use of steroids herbicide, but salicylic acid treatment could reduce the rate of chlorophyll fluorescence, so that weed and corn after weeding the control without grass was observed at the lowest salicylic acid treatment (2 mM / L).
Conclusion
In general, the results of this experiment showed that under the influence of sethoxydim, all three species of maize, johnsongrass and junglerice showed a positive response to salicylic acid foliar application. Therefore, in order to use salicylic acid as a safener, its seed treatment in corn should be used. Overall, the results showed that salicylic acid can be used as a stress reducer due to the use of sethoxydim in narrow-leaved plants. But as a safener we cannot use it universally and foliar spraying, because there is no differentiation in the response of crops and weeds. Therefore, in the use of salicylic acid as an immunizer for the sethoxydim, its seed treatment will give better results. 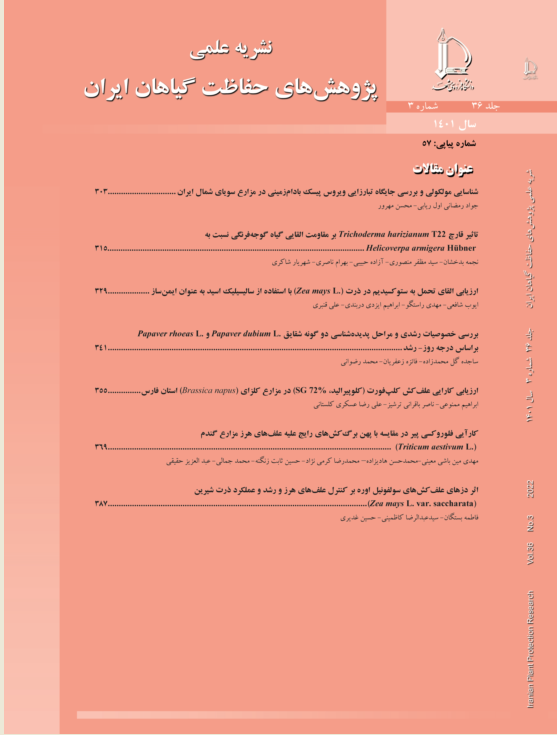