Introduction
Soybean (Glycine max) is one of the major oilseeds of the Fabaceae family. Peanut mottle virus (PeMoV) is a Potyvirus that can infect not only peanuts, but also soybeans, and some other legumes. Aphids and contaminated peanut seeds transmit the virus to healthy peanut and soybean plants, causing significant damage. Soybeans infected with the virus have been found to exhibit symptoms such as mosaic, mottling, yellowing, and stunting.
Materials and Methods
From May to October 2020, 132 leaf samples with presumptive symptoms of the virus, such as mosaic, mottling, deformation, stunting, yellowing, and wrinkling, were collected from soybean fields in Mazandaran and Golestan provinces of Iran. Total RNA was isolated using Promega SV Total RNA Isolation Kit (USA). Complementary DNA (cDNA) was synthesized using random hexamer primers and reverse transcriptase enzyme, M-MuLV thermo-resistant H (ParsTous, Iran). Subsequently, the cDNA library was amplified in the presence of Taq DNA polymerase with degenerate primers related to the genomic regions of the cylindrical inclusion (CI) and Helper component proteinase (HC-Pro) of potyviruses and the coat protein (CP)-specific primer pairs of PeMoV for Sanger sequencing. Phylogenetic analysis was performed using MEGAX (Kumar et al., 2018). Multiple alignments were performed using the MAFFT software version 7. A phylogenetic tree was constructed using the Minimum Evolution (ME) and Tamura-Nei methods with 1000 bootstraps.
Results and Discussion
RT-PCR tests with degenerate primers for potyviruses (HC-Pro and CI) and specific primer pairs for PeMoV virus (CP), followed by Sanger sequencing, confirmed the presence of this virus in soybean samples. The RT-PCR amplified fragments of 700 and 1450 bp with degenerate primers for potyviruses and CP-specific primer pairs for PeMoV, respectively, whereas no fragment was amplified from the healthy plants. The nucleotide sequence of the coat protein region of this isolate shared 88.56-95.80% identity with the corresponding sequence of other GenBank isolates. Phylogenetic trees based on coat protein alignments of the PeMoV-soya isolate with 16 other PeMoV isolates in the GeneBank grouped these isolates into two phylogroups I and II. Group I included isolates from China, Israel, Brazil, Iran, Kenya, South Korea, Turkey, Colombia, Australia, and the USA isolated from soybean, Arachis pintoi, and peanut. Group II were consisted of two isolates from Zambia (Phaseolus vulgaris). The Iranian isolate (PeMoV-soya) was placed in Group I and formed a clade with isolates from Kenya, South Korea, and Turkey. Based on phylogenetic analysis, the results showed that isolates from different hosts with different geographical origins belonged to the same phylogenetic group and probably shared a common ancestor. It indicates that geographical distribution and host do not play a role in grouping of Iranian isolate. Accordingly, it can be assumed that the multiple transmissions from one host to another (peanuts, beans, and soybeans) or host jumping, has led to the accumulation of mutations in its coating protein gene. In the study of motifs in this region (CP), the functional DAA motif at the amino terminus of the PeMoV coat protein replaced the DAG motif which is involved in aphid transmission. All PeMoV isolates contain the DAA motif, allowing their identification. A repetitive conserved sequence (EK)3 was observed upstream of this motif. PeMoV isolates (distributed across Africa, Asia, and the United States) may be geographically widespread due to this conserved sequence. In bioassay, there was a limited host range for this isolate, which was limited to soybean (Williams 82 and Essex) and peanut.
Conclusion
For effective disease management, viruses must be correctly identified. Virus detection and disease management are difficult as viruses can evolve and produce molecular and biological variations. A well-established approach that is usually used when a new virus-like disease appears is to test for known viruses. PCR is the most widely used technique for detection of plant viruses. Based on the results of this study, the presence of the peanut mottle virus was confirmed in soybean fields in the north of Iran using the RT-PCR test. Based on the CP gene, the molecular characteristics of the virus were determined. According to this, unlike mutations, recombination plays no role in the evolution of the new PeMoV. Since the Peanut mottle virus can infect peanut plants, soybeans, beans, and most legumes, avoiding cultivating soybeans, peanuts, and beans close to each other will assist in management of the disease. Using integrated cultivation and avoiding crofting will effectively reduce the creation of recombinant isolates and appearance of the resistance-breaking isolates. 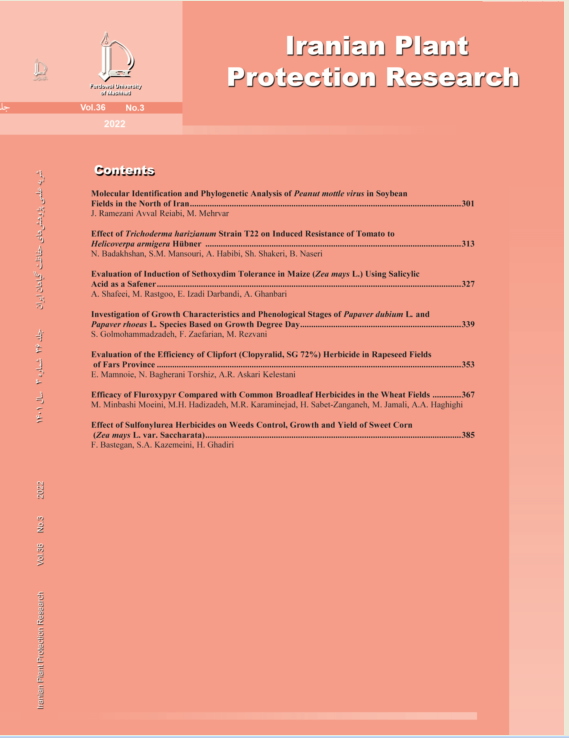