Study on the Moths of the Subfamily Xyleninae (Lep.: Noctuidae) in Parts of Western Zagros in Khuzestan and Ilam Provinces

Introduction
Noctuidae species are herbivores as caterpillars and some of them are most destructive crop pests. Moreover, they role as pollinators and prey in ecosystem. Early researches on Noctuidae of Iran were published more than 150 years ago. In recent two decades, Iranian researchers investigated the Noctuidae fauna of Iran and published several articles on different subfamilies. The subfamily Xyleninae may be paraphyletic and defined by plesiomorphic character states. Xyleninae in classic taxonomy is defined by the valva of male genitalia which is not as much constricted below the cucullus at the distal end of the clasper. The cuculus usually is expanded and bears a corona of stout setae. The ampulla is small and usually finger-like, except in Xylenina. Dorsal surface of saculus is usually irregular in direction to the base. Vesica is often short and tube-like or triangular with few basal cornuti and an elongated patch of spines on the apical half of the vesica. In female genitalia, the ductus bursae is short and heavily sclerotized; and the appendix bursae is small and inconspicuous or absent. It is worth mentioning that Lepidoptera species are one of the important elements of Zagros mountain ranges which dominated by oak forests. Their larvae are important leaf-eaters of oak plants. Therefore, the aim of this research was determining the moths’ fauna of Xyleninae subfamily belonging to Noctuidae in Zagros Mountains of Khuzestan and Ilam provinces.
Materials and Methods
Numerous night samplings were done to study the fauna of Xyleninae subfamily (Lep.: Noctuidae) in Zagros Mountains in the provinces of Khuzestan and Ilam during 2018-2019. Sampling was performed by light traps powered by 12 volt batteries and 8 watt UVB light tubes. Sampling areas were two locations in Khuzestan province namely Imamzadeh Abdollah village in Baghmalek (31°22'24"N, 50°07'51"E, 1540 m and 31°23'10"N, 50°09'29"E, 2360 m) and Shelal village in Andika (32°16'19"N, 49°33'07"E, 1700 m and 32°19'10"N, 49°35'06"E, 1465 m) as well as two locations in Ilam province namely Kabir-Kouh in Abdanan (33°02'57"N, 47°18'04"E, 1215 m and 33°03'53"N, 47°18'40"E, 1730 m) and Protected Area of Manesht and Ghelarang (33°34'47"N, 46°33'52"E, 1455 m and 33°34'33"N, 46°36'15"E, 2215 m). The specimens and genitalia slides were deposited in the Insect and Mite Collection of Ahvaz (IMCA), Plant Protection Department, Shahid Chamran University of Ahvaz.
Results and Discussion
A total of 28 species belonging to 19 genera of Xyleninae were collected and identified. Among them, 9 and 15 species were new to the fauna of Khuzestan and Ilam provinces, respectively. Furthermore, Dichonia pinkeri (Kobes, 1973) is newly recorded from the fauna of Iran. Notes on the bionomy and distribution of the collected species as well as diagnostic characters and illustrations of wing patterns and genitalia for the D. pinkeri were presented. According to the results, 9 species have not been recorded in the previous investigations in Khuzestan province. These species are as follows; Caradrina boursini, Hoplodrina ambigua, Polyphaenis monophaenis, Apamea syriaca fuscorhoda, Sesamia sp., Atethmia centrago, Evisa schawerdae, Leucochlaena muscosa, Pseudenargia deleta. 15 out of 17 collected species in Ilam were new for the fauna of this province. Because this province was less explored previously for Noctuidae fauna. This indicates that we are still far from a complete provincial list of the Noctuidae in Iran. It needs more samplings especially in area and times which less explored already and using different methods such as bait traps. We didn’t present the results on Agrochola species here and will treat them separately. 13 species were collected in both studied provinces, among which two species Hoplodrina ambigua and Polyphaenis monophaenis were new for the fauna of Khuzestan and Ilam. This implies that habitat of such species are Zagros areas including oak forest vegetations and their distribution range may be further expanded in Zagros range. Comparing to the results of Esfandiari et al. (2011) on the noctuid fauna of sugarcane plantations in Khuzestan province, only Spodoptera exigua and Caradrina clavipalpis out of their 9 Xyleninae species were recorded in the present study. This is because of semidesert climate in sugarcane farms which differs from climate and land cover of our sampling areas. It is necessary to investigate the noctuid fauna, complete the checklists and provide identification catalogues for Iran. Also, larval stages and food plants must be studied in each area. Furthermore, we need local taxonomic revisions in some groups. 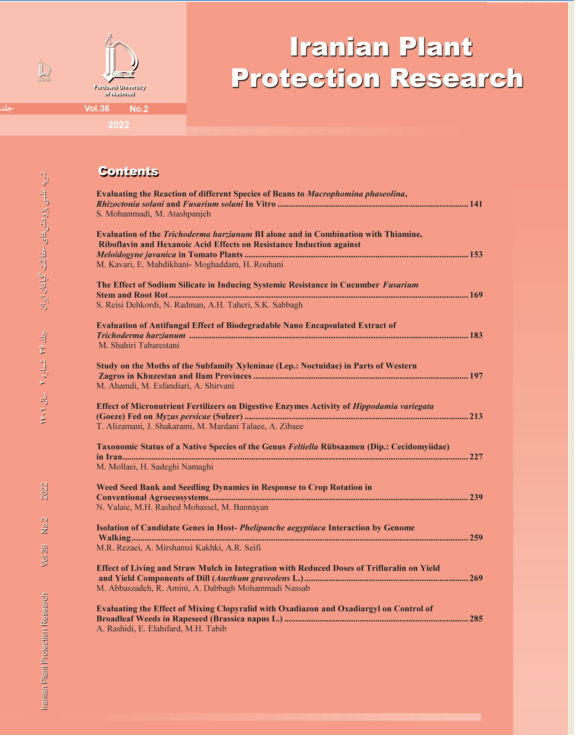