Introduction: Among legumes, soybean [Glycine max (L.) Merr.] is an important plant that grown throughout the world. There are many pathogens that reduce soybean yield. Plant viral diseases cause serious economic losses in many major crops by reducing yield and quality. Soybean mosaic virus (SMV) is amongst important pathogens that infect soybean. Plants use resistance genes against the invasive pathogens. The identification mechanism is based on gene-for-gene hypothesis. Plant resistance (R) genes direct recognition of pathogens harboring matching avirulent genes (signals) leading to activation of host defense responses. It has long been hypothesized that under selection pressure the infidelity of RNA virus replication together with large population size and short generation times results in emergence of variants (mutants) capable of evading R-mediated recognition. Four R gene including Rsv1, Rsv3, Rsv4 and newly Rsv5 have found in soybean operating against SMV.
Materials and Methods: In this study, Rsv1/Soybean mosaic virus (SMV) pathosystem was used to investigate this hypothesis. Infectious cDNA clones of SMV-N (pSMV-N) and SMV-G7 (pSMV-G7) inoculated biolistically on Essex (rsv1) and SMV-G7d (pSMV-G7d) on Williams82 (rsv1) served as the sources of parental viruses. Sap containing viral progenies in 50 mM phosphate buffer, pH 7.0, derived from the infected tissues of biolistically inoculated Essex (rsv1) and Williams82 (rsv1) served as inoculum to mechanically inoculate carborundum-dusted primary leaves of other soybean genotypes. Soybean genotypes containing alleles of Rsv1 were inoculated with SMV strains N, G7 and G7d. Soybean genotype Williams82 (rsv1), susceptible to all strains of SMV and Rsv1-genotype soybean PI96983, Kwanggyo (Rsv1-k), Marshal (Rsv1-m), Ogden (Rsv1-t), Raiden (Rsv1-r), Suweon97 (Rsv1-sk) and Touson50 (Rsv1-n) were used in this study. All soybean seed were obtained from field-grown plants shown to be free of SMV by indexing. The inoculated plants were maintained in a growth chamber operating at 22°C with a photoperiod of 16h light and 8h dark. After twenty one days of post-inoculation, plants were examined by indirect ELISA and RT-PCR. Nested PCR was done and after Sanger sequencing of PCR products, results were analyzed by using Finch TV and MEGA7 software. Total RNA was isolated from top fully-developed systemically infected trifoliate leaves using an RNeasy Plant mini kit (Qiagen) as instructed by the manufacturer. RT-PCR was done in the presence of Superscript reverse-transcriptase III (Invitrogen) as instructed by the manufacturer. Nested PCR amplification of the entire HC-pro and P3 cistrons was done using two pairs of primers, SMV-239s / SMV-3910a and SMV-482s / SMV-3840a, in the presence of EX Taq polymerase (Takara Bio). The resultant amplicons were purified with a QIAquick-PCR Purification Kit (Qiagen) or MinElute® PCR Purification Kit (Qiagen) and sequenced using primers SMV-1468s, SMV-1614a, SMV-2289s and SMV-2916s. Sequencing was done at The University of Tennessee DNA Sequencing Facility.
Results and Discussion: One out of ten York and Kwanggyo plants and two out of thirty Ogden plants inoculated with viral progeny derived from the reproduction of soybean mosaic virus strain N complementary DNA (c-DNA) molecule on susceptible soybean plants, which was cloned in the laboratory (molecularly cloned SMV-N or pSMV-N) showed viral symptoms and were positive in indirect ELISA. In mechanical inoculation using the sap from these plants, the virus was again transferred to York, Kwanggyo and Ogden plants and subsequently was adapted to these plants. After performing RT-PCR test and determining the full-length sequence of the HC-Pro (Helper Component-Protease) and P3 cistrons of the virus, the position of the point mutation and the amino acid encoded by the nucleotide exchange at the mutation point, using MEGA7 software, was identified. In York and Kwanggyo plants, a point mutation was observed in the HC-Pro whereas in the Ogden plant in the P3 cistron.
Conclusion: The evolution of viruses is unavoidably linked to the evolution of their hosts. Due to the mutations in virus genome and the breakdown of resistance of various soybean genotypes, as well as the fact that the genome of the soybean mosaic virus is RNA type and the possibility of mutation is high, it can be a warning sign for plant breeders producing soybean plants with resistance genes to different strains of the virus. RNA viruses apply all known mechanisms of genetic variation to ensure their survival. Also, the intersection of resistant and susceptible genotypes and the study of the allele of resistance genes can be effective in producing resistant genotypes. The identities of different Rsv genes need to be revealed and the key components in SMV resistant signaling pathway need to be identified. So, a good breeding-for-resistance strategy would aim to develop cultivars with resistance against a wide range of strains of SMV. Transgenic soybean lines expressing part of the P3 and HC-Pro genes have been showed a stable and enhanced resistance to several strains of SMV and have the potential to significantly increase soybean yield. 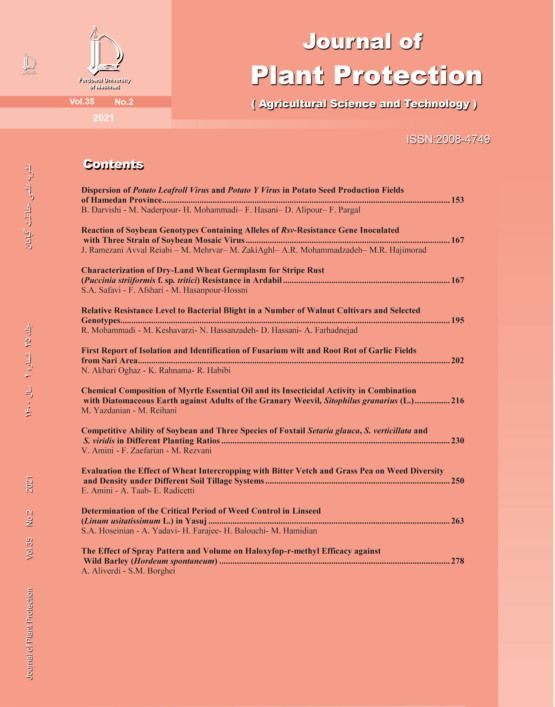