Department of Agrotechnology, Faculty of Agriculture, Ferdowsi University of Mashhad

Introduction: The light received by plants is composed of different types of wavelengths (sanged from ultraviolet to infrared). The region among 400 nm to 700 nm is what plants use to drive photosynthesis, typically referred as Photosynthetically Active Radiation (PAR). Plants are so proper light filters. Leaf chlorophylls and carotenoids absorb and use most of the R light available for photosynthesis, but reflect or transmit most of the FR light, those parts of light which transmitted through vegetation, depleted in red and strongly enriched in far-red even before direct shading takes place. The natural R:FR ratio varies from 1 to 1.2 in sunlight above a canopy, gradually decreasing to lower to 0.2 under a dense canopy. Red to Far Red ratio (R:FR) is considered as an indicator of the light quality. Plants are able to detect changing in light quality via their phytochromes. Understanding the decrease of light quality create a series of reactions in the plant such as stem elongation, reduction in stem diameter, and reduction in shoot and root biomass and so forth that are known as shade avoidance syndrome (SAS). In this research, a pot experiment established to evaluate the effects of neighboring on shade avoidance mechanism in red bean (Phaseolus vulgaris).
Material and Methods: Pot experiment was conducted based completely randomized designs with four replications at the Research Greenhouse of Ferdowsi University of Mashhad, 2016 and 2017. The treatments included the red bean (Phaseolus vulgaris) growth without neighboring and 1, 2 and 3 red bean plants as neighbors. In each pots (23 cm diameter and 21.5 cm height), 3 to 4 red bean seeds (Straight, Derakhshan) were planted and finally one plant was selected and kept for 45 days. The distance between each treatment was one meter for keeping plants away from mutual shading. In each treatment, 25 cm distant was considered between pots. After 45 days, R:FR ratio was measured beneath the canopy using a quantum sensor (SKR 200 model) subsequently, the main plant were harvested and some traits were measured. Shoot height, petiole length, and area of canopy, first leaf and plant symmetry. Then plants separated into leaves and stems. After measuring the total leaf area using LI-3000 area meter, plant parts were oven-dried at 80°C and weighed. The analysis of variance (ANOVA) for completely randomized design was performed for all responses using PROC GLM in SAS 9.3. Treatment means were compared using either the LSD test or single degree of freedom contrasts.
Results and Discussion: Result of this experiment showed that by increasing the number of neighboring plants to 3 plants,  the light quality (R to FR ratio) decreased down to 0.5 in 3 plants neighbored treatment. Accordingly, changing the light quality influenced the traits reactions. By increasing the adjacent plants number, shoot and plant height were increased. The highest plant (28 cm) and shortest (4.55 cm) petiole length was recorded in the non-neighbor treatment. To measure the leaf biomass, plants were separated into the left (that part of plant with growth opposite the neighbor) and right (toward neighbor plant growth). Result showed that in the trait with 1 plant in neighborhood, symmetry of plant was impaired (0.23 percent). In the trait with 3 neighbors, the first leaf angle was 1/35 that indicates plants attempt to reach towards high light quality. In this experiment, plant symmetry and plant angle was proposed as a shade avoidance syndrome. One main result in this experiment was reduce in area of canopy and reduction in lateral growth and production of branches in plant. In some crops such as legumes, lateral expansion to making pods is the main part of yield. Reaching out for light and increase in plant height would suppress the lateral growth which impact the productivity of plant. Moreover, diminish in leaf aria index reduce the leaf dry matter, as the main photosynthetic organs decreased. Finally, result of this experiment and those study on shade avoidance effect on crop destiny, should be considered in yield gap estimation. In these sort of experiments, total icons involve in yield diminish is considered except shade avoidance. Role of light quality also should be noted in future studies. 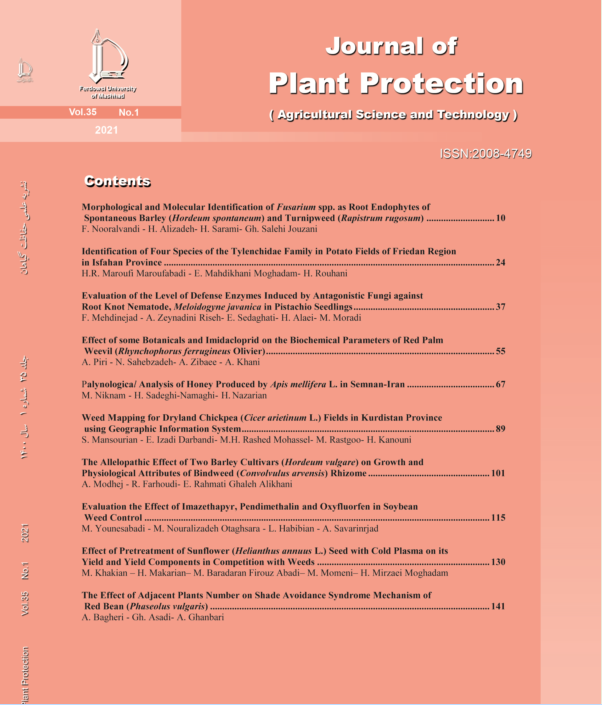